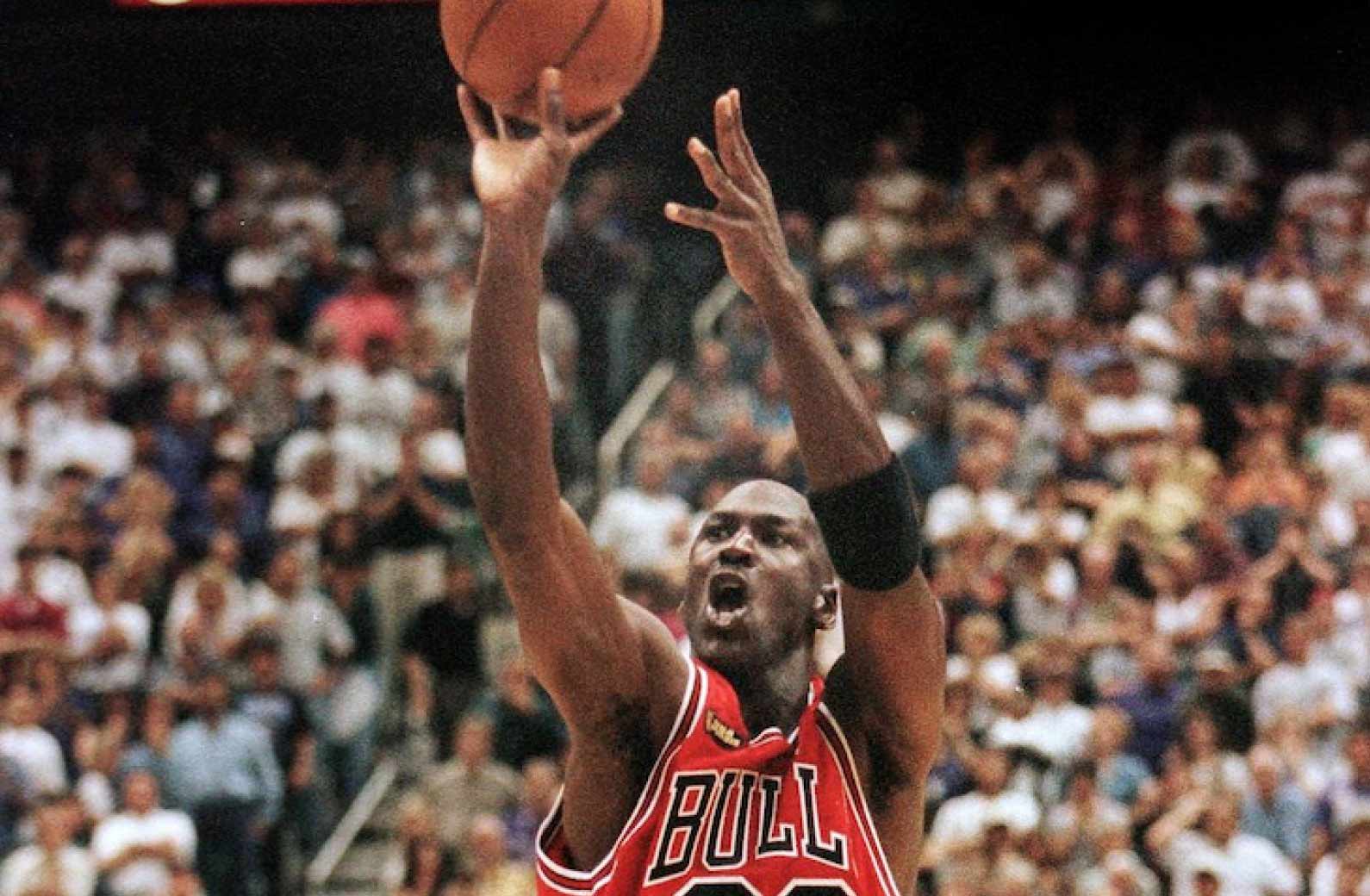 Earn a bonus for each friend you refer to Bovada!

Down 3 games to 2 in the series, the Heat were on the brink of disaster as they found themselves trailing by three points with only seconds left on the clock. Miami fans had lost all hope when LeBron missed an open three-pointer, until Chris Bosh managed to pull down the offensive rebound. He found Ray Allen in the corner for a game-tying bucket with just 5.2 seconds remaining. Miami ended up winning the game in overtime and the rest is history as the Heat won Game 7 to take home the 2013 NBA title.

Michael Jordan had plenty of great moments throughout his six NBA Finals appearances, but few were as iconic as his infamous shrug. With the Bulls looking to win back-to-back NBA Championships in the 1992 NBA Finals, MJ went off from beyond the arc in Game 1 and put up 35 points by halftime. After his sixth three-pointer of the half, Jordan simply shrugged his shoulders with a coy grin as if to say “What can I say?” The moment was captured perfectly for the cameras and has since become a signature NBA Finals memory.

It was Game 1 of the 2001 NBA Finals and the Philadelphia 76ers were looking to prove they could handle the defending champions, the Los Angeles Lakers. Allen Iverson was on a mission in that series opener and when the game went to overtime, he showed the world he didn’t care who was in his way. After nailing a jumper for his seventh straight point in the extra frame, the Lakers’ Tyronn Lue tripped and lay in Iverson’s path. AI coldly stepped over his defender while staring him down with a menacing look and that disrespectful moment has been famous ever since.

The Hawks only have one NBA Championship in franchise history and it wouldn’t have been possible if it weren’t for the impressive Game 6 performance by Hall of Famer Bob Pettit. Not only did the legendary power forward put up 50 points in that game, but he managed to score 19 of his team’s final 21 points to win by just a single point and clinch the 1958 NBA Championship.

Few players in NBA history could fly through the air like Julius Erving. The 76ers star put his gravity-defying hops on display for all to see in Game 4 of the 1980 NBA Finals. As Dr. J drove the baseline, he somehow managed to scoop in a layup from behind the backboard for one of the best baskets you’ll ever witness in an NBA Finals game. It was a play you had to see to believe, and one that will live on forever in the annals of NBA Finals history.

They say records are made to be broken, but this one could be the exception to the rule. Playing for the Lakers, in the franchise’s first ever finals appearance, Baylor went off in Game 5 scoring an incredible 61 points. The Lakers ultimately lost the series to the Celtics in seven games, but Baylor’s record for most points scored in an NBA Finals game still stands today.

There’s no better feeling than going out on top and that’s exactly what Michael Jordan did after sinking the final dagger of the 1998 NBA Finals. Recognized as one of the most clutch shots in NBA Finals history, Jordan shook off a defending Byron Russell and sunk a picture-perfect jumper in the waning seconds of Game 6 to secure the Bulls’ second three-peat. There’s a bit of controversy as to whether or not Jordan pushed off, but the end result was the perfect script for MJ’s final shot in a Bulls uniform.

The game’s biggest stars need to be at their best when the lights shine the brightest. Legendary Celtics big man Bill Russell did just that in Game 7 of the 1962 NBA Finals. In a stat line you’d only see today playing video games, Russell put forth a dominant 30-point, 40-rebound performance and led Boston to their fourth straight NBA Championship.

Starting an NBA Finals game as a rookie is an impressive feat on its own, but Magic went above and beyond in Game 6 of the 1980 NBA Finals. With star center Kareem-Abdul Jabbar injured, the Lakers rookie point guard started the game at center and ended up playing all five positions on the floor. Not only did Magic show off his incredible versatility, but he ended up dominating the game with 42 points, 15 rebounds and 7 assists despite playing out of position.

The top spot on our list of the best moments in NBA Finals history goes to Michael Jordan for his performance in Game 5 of the 1997 NBA Finals, otherwise known as ‘The Flu Game’. While most people in his condition would call in sick for work, Jordan grinded out an epic showing despite only being able to get out of bed just a few hours before game time. Leaning on his teammates for support between whistles, MJ finished with 38 points, 7 rebounds, 5 assists and hit the game-winning bucket to solidify one of the most impressive efforts ever seen on a basketball court.

That rounds off the top 10 best NBA Finals moments in history. There have been many great NBA Finals moments that could have made this list, but these are the best and most iconic. Are there any changes you would make? If you enjoyed reading our best moments in NBA history, you will enjoy reading the top 10 players in March Madness history or the best UCL moments of all time! So you can begin betting on the NBA Finals, and all other sports, be sure to sign up to Bovada today. Once signed up you can enjoy sports betting, the best online casino and online poker games too.