We’re into the last month of the regular season in the NFL, and our power rankings are here to show you which teams are still in the running to win it all at Super Bowl 55.
The Kansas City Chiefs and New Orleans Saints clinched the first of league’s playoff spots last weekend, and the oddsmakers like their chances.

But there’s plenty of action to be had with other teams still in the mix, including a solid Bills squad and even the surprising Cleveland Browns.

Who do you think has the most power to go all the way?

#1 – The Kansas City Chiefs (11-1) +200
The Chiefs’ road to the Super Bowl is paved by players like TE Travis Kelce giving Patrick Mahomes tons of options on every play.

#3 – Green Bay Packers (9-3) +800
Davante Adams is one of the best WR’s in the game, and he helped Aaron Rodgers notch his 400th career TD pass last weekend. Expect more in January and maybe beyond…

#4– Pittsburgh Steelers (11-1) +800
The first loss for the Steelers this season should come with an asterisk, after a short week. They are still primed for a deep postseason run.

#6 – Seattle Seahawks (8-4) +1200
Is something shaky in Seattle, or did they just run into a surging Giants’ team? We’ll get the answer later in the season when they face two division rivals.

#7 – Tampa Bay Buccaneers (7-5) +1400
A bye week might have given Brady and his receivers more time to work on their timing, and none of their remaining opponents has a winning record. 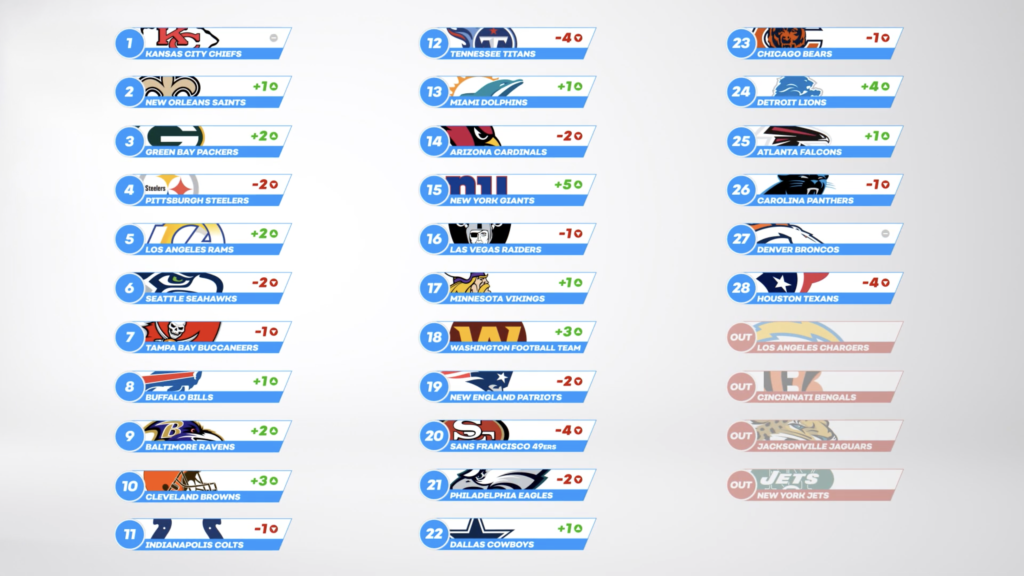 #11 – Indianapolis Colts (8-4) +3000
Philip Rivers has started 236 straight games and he’s playing as if this season is his last shot at Super Bowl glory. Can the Colts ride him to the promised land?

#14 – Arizona Cardinals (6-6) +6000
A tough loss to the Rams last weekend means the Cardinals are on thin ice in a tough NFC West. Can Kyler carry the team on his young shoulders?

#15 – New York Giants (5-7) +6600
That’s four straight wins – including a big upset over Seattle – for the Giants. The biggest movers in our power rankings, they could be a tough matchup in January for any team.

#16 –  Las Vegas Raiders (7-5) +7000
It took a last-second miracle to beat the lowly Jets last weekend. The Raiders will need a more consistent effort to contend in the playoffs.

#17 – Minnesota Vikings (6-6) +7000
From a 1-5 start, Minnesota has scrapped its way to an outside shot at the playoffs. They still need to beat the Bucs and the Saints to get there though.

#18 – Washington Football Team (5-7) +7500
Keeping pace with the Giants, Washington made a statement by handing Pittsburgh its first loss of the season. Can they ride the momentum?

#19– New England Patriots (6-6) +10000
Suddenly the Pats are back? The league’s most confusing team still has a chance at the playoffs,  and they still have the mastermind Belichick calling the shots.

#21 – Philadelphia Eagles (3-8-1) +15000
New QB Jalen Hurts stepped in to give the Eagles some jump last weekend, but it wasn’t enough to stop them from sliding down the power rankings.

#22 – Dallas Cowboys (3-8) +25000
The Cowboys will need to find a way to keep up with the surging Giants and Washington if they want to keep the NFC East title within reach.

#23 – Chicago Bears (5-7) +30000
A six-game losing streak has the Bears slipping in the power rankings. Coach Nagy might have lost the players’ confidence.

#26 – Carolina Panthers (4-8) +75000
Coming off a bye, Carolina needs to win every game down the stretch, starting with a winnable game against the Broncos.

#28 – Houston Texans (4-8) +100000
A terrible start to the season put the Texans in trouble early, but Deshaun Watson and David Johnson make the future look a little brighter.

Some big teams are still showing signs of weakness on any given week. Last weekend it was Pittsburgh going down for the first time all year, and Seattle looking like they might struggle to pick up big wins down the stretch.

Meanwhile, a number of teams could still make a run – and with some big odds too. The Raiders and Titans are among the teams that could get hot come playoff time.

Check out all the action and make your picks today at Bovada!