This is it! Our final power rankings for picking the Super Bowl winner during the 2020 NFL regular season are here.

The Bills are the talk of the league right now, averaging 36 points in their last four games to go along with a tough defense.

Some signs of life in Pittsburgh means the Steelers will be a tough opponent in the postseason, but they’ve fallen out of favor with the oddsmakers – which could be good if you like playing longer odds.

The final weekend has some crucial matchups – who’s your pick to survive and go all the way?

#1 – The Kansas City Chiefs (14-1) +175
They have all the tools to go all the way to Super Bowl 55, but they played soft with some weaker opponents. Can they be playoff-ready after cruising during the regular season?

#3 – New Orleans Saints (11-4) +750
Alvin Kamara will be key to the Saints’ success in the postseason – if he’s putting up numbers, watch out for New Orleans.

#4 – Buffalo Bills (12-3) +850
Plenty of pundits are calling the Bills the team to beat in the AFC now. If Josh Allen stays hot, watch for them to go deep into January… and maybe beyond.

#5 – Seattle Seahawks (11-4) +1200
Seattle clinched the NFC West and regained a bit of their mojo against the Rams. Can they keep the momentum going? Or are Russell Wilson’s best years behind him?

#6 – Tampa Bay Buccaneers (10-5) +1200
After blowing out the Lions in Week 16 to clinch a playoff spot, the Bucs have a good shot at facing the NFC East winner, which could be the easiest matchup of the playoffs.

#7 – Baltimore Ravens (10-5) +1300
The Ravens have won 4 straight and face Cincy next – they should clinch their playoff spot and head into January with a head of steam.

#8– Pittsburgh Steelers (12-3) +2000
Big Ben engineered a comeback win over Indy to halt the Steelers’ skid. Is this the start of a new streak heading into the postseason?

#10 – Tennessee Titans (10-5) +2800
QB Tannehill has the highest passer rating in the NFL, but the Titans will need to be able to rush opposing teams’ QB’s if they want to go anywhere – they have the fewest sacks in the league. 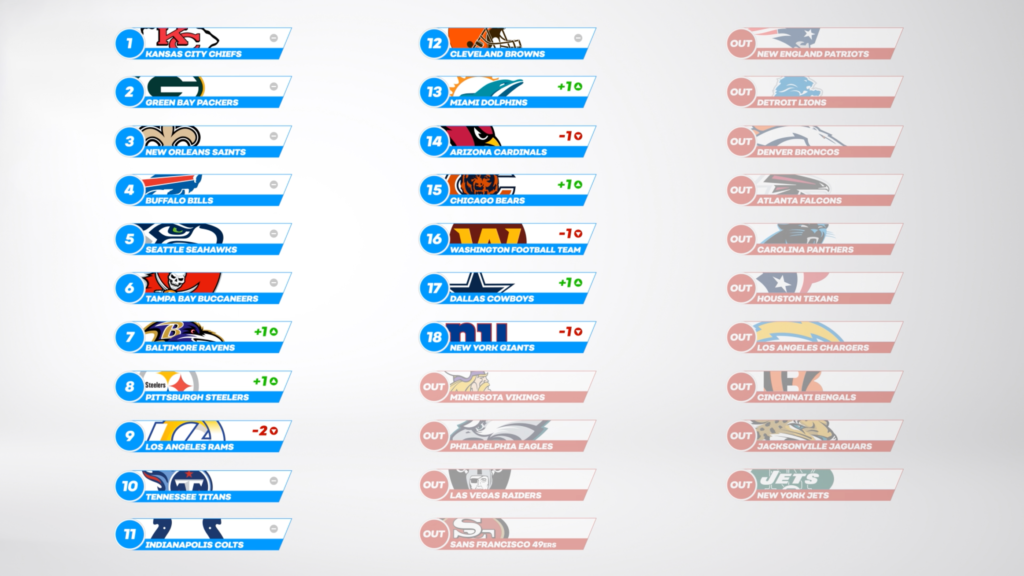 #11 – Indianapolis Colts (10-5) +3300
A tough loss to Pittsburgh means the Colts need help in the final weekend to get into the playoffs.

#13 – Miami Dolphins (10-5) +6600
FitzMagic baby. Tua got pulled but Ryan Fitzpatrick stole a game for the Dolphins. Coach Flores still says Tua’s starting this weekend as they push for the playoffs. C’mon coach!

#14 – Arizona Cardinals (8-7) +8000
A rough game against the Niners mean that Arizona needs to win their last game to get into the playoffs. After that, who knows how far Kyler Murray can go?

#15 – Chicago Bears (8-7) +9000
Chicago needs to win against Green Bay to get into the postseason, or hope for an Arizona loss. Either way, their QB situation leaves them on shaky ground for the playoffs.

#16 – Washington Football Team (6-9) +10000
Washington controls its own destiny in the final game of the season on Sunday night, but big troubles at the QB position could spell WTF for WFT.

#18 – New York Giants (5-10) +25000
A win against the Cowboys combined with a Washington loss puts the Giants into the playoffs. Beyond that, at 6-10 they’ll be in tough against any other playoff team.

In the postseason, experience matters at the QB position – unless you’re Patrick Mahomes, who was balling from Day 1.

So if you want to play it safe, Aaron Rodgers, Drew Brees and Tom Brady will give you a good shot.

If you like the young guns, go with Ryan Tannehill, Lamar Jackson or Josh Allen.

Who do you trust to lead their team to Super Bowl glory?

Check out all the action and make your picks today at Bovada!