Bovada’s Power Rankings give you the straight goods every week, so you can see who’s got the best odds to win Super Bowl 55.

Heading into Week 6 of the NFL season, the rankings are getting a little tighter at the top, with the Chiefs showing some vulnerability and teams like the Titans and Steelers continuing to rack up the wins.

Has your Super Bowl pick changed since Week 1?

#1 – The Kansas City Chiefs (4-1) +400
A bit of a hiccup against the Raiders, but KC is still the team to beat according to the oddsmakers.

#2 – Baltimore Ravens (4-1) +500
The Ravens’ D is scary, holding teams to an average of a league-low 15 points per game.  They should remain a force deep into January.

#5 – New Orleans Saints (3-2) +1100
Their OT win against the Chargers didn’t move the needle – they’ll need to show more consistency to go deep into the playoffs.

#6– Pittsburgh Steelers (4-0) +1200
Oh Canada! Canadian WR Chase Claypool is lighting up the league and the Steelers don’t have many weak spots.

#8– Tennessee Titans (4-0) +1600
Remember the Titans? They didn’t miss a beat after their Covid scare, and they’re still undefeated. 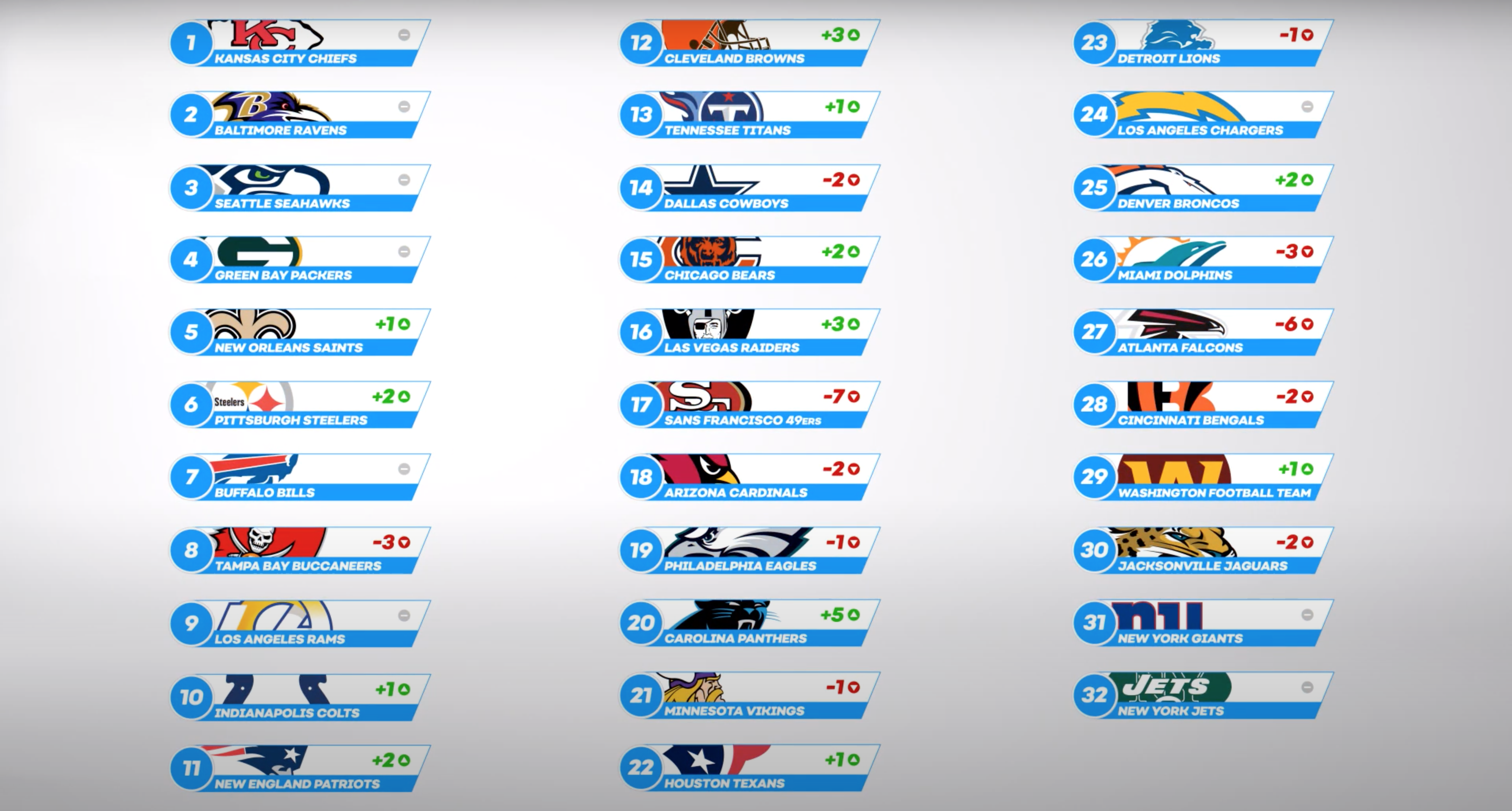 #12 – New England Patriots (2-2) +2800
Cam should be back against Denver this week, and the Pats might have reason to be optimistic again.

#13 – Cleveland Browns (4-1) +3000
The Browns are first in the league in rushing, which could be a big bonus when the playoffs arrive.

#17 – Arizona Cardinals (3-2) +5000
The Cardinals beat up on the Jets last weekend, but can they keep up the momentum against tougher teams?

#20 – Carolina Panthers (3-2) +7500
The Panthers have won 3 straight on the strength of the league’s 5th best passing game. Just wait till CMC comes back.

#27 – Atlanta Falcons (0-5) +30000
What started as a couple of close losses has turned into a rough season for Atlanta. Matt Ryan needs to turn back the clock.

#28 – Cincinnati Bengals (1-3-1) +40000
Seven sacks had Joe Burrow feeling rough as the Bengals just dropped another one. They need to protect their star QB better.

#29 – Washington Football Team (1-4) +40000
They’ve got 3 consecutive division matchups ahead. Can they climb back to rankings respectability?

With the schedule being shuffled for at least eight teams so far, the NFL’s weekly matchups are even more unpredictable than ever.

Good thing the oddsmakers at Bovada are working overtime to deliver the Super Bowl Power Rankings week after week to make sense of it all.