The league’s best QB’s are getting ready to sling it this weekend, and we’re all over it. The Bovada Power Rankings will show you who’s got the inside track to take his team all the way to Super Bowl glory.

Josh Allen and Patrick Mahomes were babies when Aaron Rodgers and Tom Brady were already playing in big NFL games and launching TD passes. But one of the young guns will be in the Super Bowl for sure, and either of them has the game to capture a ring.

It’s going to a great Sunday no matter what… 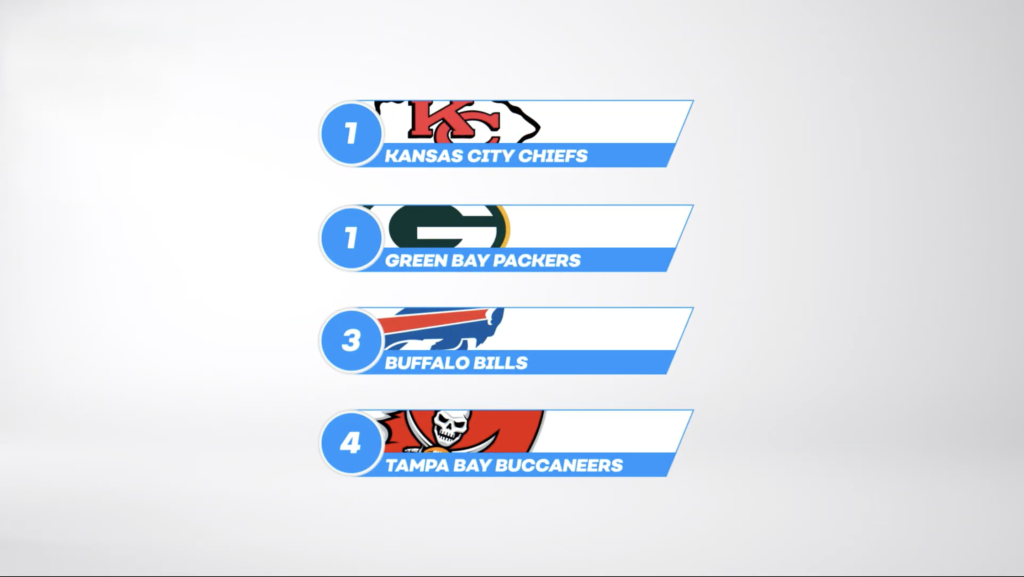 #1 – Green Bay Packers +220
Green Bay is 18-5 at Lambeau in the playoffs, which in itself makes a strong case against a team coming from sunny Florida. Add in the magic of ageless Aaron Rodgers and dynamic Davante Adams, who has 6 or more catches in 13 straight games and the case gets even stronger. Meanwhile, their 3-headed running back attack, led by Aaron Jones, put up close to 200 yards against the tough Rams’ D, so they can play it both ways on offense.

But the Packers’ run defense was only 14th in the league, behind even Jets and Redskins. This could be their achilles’ heel against the Bucs, who ran 30 carries and can hold onto the ball for a long time.

#2 – The Kansas City Chiefs +220  Backup QB Chad Henne is 5-22 in his last 27 starts. So the Chiefs are really hoping that Patrick Mahomes comes through after a couple of injuries last weekend. Either way, the 1-2 punch of Tyreek Hill and Travis Kelce could still do some damage against the Bills. They each had 100+ yards again in their win last weekend.
Like the Packers though, it’s the run defense – close to the bottom of the league – that could hurt the Chiefs the most. They’ll need to rack up a bunch of points and win the time of possession battle if they want to make it to the big dance.

#3 – Buffalo Bills  +275  Josh Allen is playing at an all-world level right now, so it might just be his time. He’s 6-0 against top 10 defenses this season, and the Chiefs for sure don’t have a top 10 D. Look for Allen to run more this weekend too, with KC’s weakness against the run. Buffalo doesn’t have the Bills Mafia in their corner for this road game, but players like Stefon Diggs and Cole Beasley have been showing up big-time all season so it might not matter.
The weakest spot for the Bills? They were 28th in the league in red-zone defense this year, and with the weapons that KC has, this could spell trouble.

#4 – Tampa Bay Buccaneers +400  The Buccaneers are usually all about Tom Brady – who is 6-0 with 16 TD’s since Week 13 – but it’s their defense that was the story last weekend. They held New Orleans’ WR Michael Thomas to zero catches and picked off Drew Brees three times. If they keep that up against the Packers, and RB Leonard Fournette has another strong game to go along with Brady’s big-game experience, they could be headed home for the Super Bowl.

Your biggest bang for the buck, money-wise, is to take the Bucs. But with a sub-200 yard game and a completion rate of barely 50% last week, has Brady lost some magic?

If you want to play it safe, the Packers and Chiefs are your choices – but is Mahomes going to be 100%?

So many questions! Whichever way you choose, go ahead and make your picks today at Bovada!